We were up before the ‘cock’s crow’ this morning as we were bound for Clingmans Dome here in the Park and wanted to get there before the crowds.

It was Memorial Day weekend here in the U.S. and it has been extremely busy  in Gatlinburg and although most of the crowds have all gone home, it’s still holiday time for lots of people some schools have ‘broken up’ for the summer. 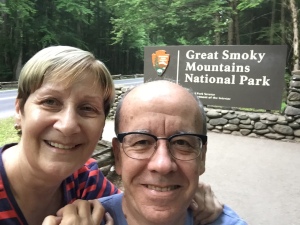 The Great Smoky Mountains National Park was established in 1934 and there isn’t one straight road in the whole Park. The road to the dome is no exception, it’s like riding a roller coaster twisting right and left the whole way. Just the thing for someone who suffers from motion sickness!!!

A ‘dome’ in Smoky Mountain vernacular is a “rounded mountain or ridge top.” Clingman’s Dome is 6.643 feet above sea level, the highest point in the Great Smoky Mountains and the third highest summit east of the Mississippi River. A paved, but very steep trail, gaining 330 feet in elevation in a half-mile, leads to a concrete observation tower to the top of the dome. During good weather the view from the tower encompasses a seemingly endless sea of mountain ridges and valleys. The tower provides a panoramic view of 360 degrees and offers a look at the whole of the Great Smoky Mountains and beyond, including five states. It holds the distinction of being the highest point along the Appalachian Trail, a 2,174 miles footpath that runs from Georgia to Maine.

Sand on the Appalachian Trail

The area is made up of Fraser fir trees and this is one of the few areas in the world where they grow wild. Unfortunately, the firs are being attacked by a tiny non-native insect called the balsam woolly adelgid, believed to have been introduced from Europe in the 1950s.

The tower at Clingmans Dome

We met a lovely young man called Thomas from Belgium at the dome. He’s walking part of the Appalachian Trial and then will be meeting his sister in Charleston and travelling on to Savannah. As that mirrors our itinerary there’s every chance we may meet him again!

Si and Sand at the tower on Clingmans Dome

Si and Sand at Clingmans Dome

Our next port of call was the Cherokee Heritage Museum in the town of Cherokee. We met some people on our Coca-Cola tour who told us this was a place not to miss and they were right.

At the Cherokee Museum

It tells the story of 13,000 years of Cherokee history. The Cherokee were the original inhabitants of the Great Smoky region. All of the southern Appalachians were once the Cherokee homeland. In the 1800s, the increasing westward movement of white settlers, coupled with fraudulent treaties with state and federal governments and the discovery of gold in Georgia, led to an escalation of conflicts. At his inauguration, President Andrew Jackson presented a plan for the removal of Native Americans to western territories (now Oklahoma) and in 1830 Congress pass the Indian Removal Act.

In May 1838, Federal troops and state militias began a brutal roundup of the Cherokee for a forced match, now known as “The Trail of Tears,” to unknown western territories.

The Museum was very thought provoking and when we had finished we decided our morale needed a little boosting so stopped off at the Cherokee Casino Resort. Well, we would wouldn’t we! It turned out to be very profitable and one of the Monopoly machines was very generous indeed!

As we are now a week into our holiday we felt it was time to right a wrong …….. Si hasn’t had any ribs yet and regular followers of the blog will know how Si likes his ribs! So, we went to Calhoun’s Restaurant here in Gatlinburg because according to them they have the “best ribs in the USA.” It turns out this could be true, Si said they were excellent.

We started the meal with fried green tomatoes. We don’t see them on menus very often, in fact we’ve only had them once before. I’m sure you will all remember the film ‘Fried Green Tomatoes‘ and if you don’t then please get a copy immediately and enjoy. It’s a wonderful film.

I must say that I had the most wonderful beverage, well two actually, called Tito’s Mountain Mule. They were made up of handmade vodka, house made ginger ale, muddled lime and fresh mint. They were magnificent and when followed by Disaronno it’s a miracle this blog is being written tonight!!

Sand and that drink, Oh dear, by the look on my face I think this must be the second one!!

Tomorrow is our last day in the Great Smokies before moving on to Charleston so please join us again as this part of our holiday comes to an end.