Surprise, surprise, I didn’t think I’d get to write the blog today but as we arrived at the airport in plenty of time and there’s free wifi I thought I would make use of the time and get it done.

We checked out of our hotel this morning at the latest time we could 12.00, because our flight tonight isn’t until 10.10 p.m.

It was another glorious day and the drive was very pleasant. We decided that we would stop for lunch once we found a Cracker Barrel (CB). We had to drive a couple of hours before we found one but I saw the CB sign from way, way down the road and shouted at the top of my voice ‘Cracker Barrel’. I shouted so loud that Margaret (sat nav) asked me to speak my instructions. It was so funny! 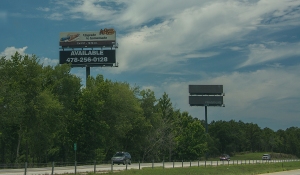 Sadly, this one was not ‘up to scratch’. The service was awful! With CB you can be in eat and out in a jiffy but today it took well over an hour.

The food was good though. Si had his shrimp and I decided that as it was the final day of our holiday that I could ‘let myself go’ a little and I had a burger with cheese and fries! It was just fabulous. We ordered an apple dessert but the poor young waitress who was under great stress got all flustered and delivered us a cobbler with cream and ice-cream. It was huge and we didn’t manage to eat it all.

Si with his shrimp

Sand with her naughty burger!

On the table they have a little game that customers can play while they wait for their food. It’s a form of solitaire!! We both had a go but of course after a few tries Si managed to win the game. Well he would, wouldn’t he!! Bless!! 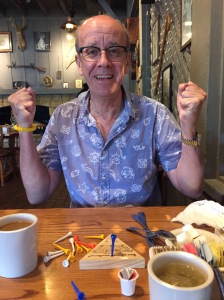 It was more or less a straight drive here to Atlanta Airport but at the last moment dear Margaret (sat nav), rather let herself down and started giving us instructions in all the wrong direction. Luckily, the signage was very good so we were able to follow that instead. 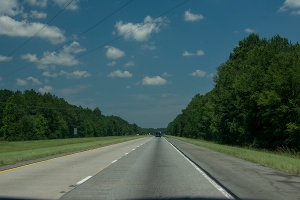 Saw this interesting water tower along the way!

When we arrived at the Avis Car Rental Returns we were met by a very pleasant young man who found great delight in telling us that his first foster Mum was English and how he loved our trifle, roast beef and yorkshire pudding and what fantastic cooks the British are! Crumbs, that’s a first, most Americans think our food is just awful.

It was a quick trip on the bus to the airport terminal and we waited anxiously whilst they weighed the cases!! I’m very proud to say that both cases weighed in just under our allowance!! Hooray!

For the regular blog followers you’ll know that whenever we come on holiday we usually end up purchasing an extra suitcase to accommodate all the purchases we’ve made during our travels. Well, we didn’t buy a suitcase this time but we did buy a back pack instead to take the extra load. I’ve made a note that the next time we come on holiday to remember to pack a back pack for all those ‘little extras.’ We must have six at home already!!

Thing is, the backpack is quite heavy and poor Si’s ended up carrying two, the new one and his camera bag! Hey ho!

After the bag weighing we made our way to Homeland Security and there was the biggest queue we’ve ever seen at an airport. It must have taken us 30 minutes just to get through. They use the full body scanner here. I made sure to hold my stomach in so as not to give the poor person watching the scanner a shock!

So, we’ve purchased all the nibbles to take on board. Although they give you things to eat and drink there are times when one just needs a few of their favourite things.

The weather forecast for tomorrow looks good so fingers crossed we won’t need the wet gear!

I suddenly remembered a couple of things I forgot to write in the blog yesterday!

First, do you know what they call peanuts in South Carolina? Answer: Goobers!

Secondly, there’s a house in Savannah called the Juliette Gordon Low (JGL) house that is open to the public. The owner was a very interesting lady and I wanted to tell you about her.

In 1912, JGL and Baden-Powell took a trip to the United States to spread the scouting movement. She hoped to spread the movement to her hometown, Savannah, as a way to help girls learn practical skills and build character.  She formed the first American Girl Guide troop in Savannah, Georgia that year. In 1915 the United States’ Girl Guides became known as the Girl Scouts and JGL was the first president. She stayed active until the time of her death.

Thought that was all rather interesting.

Must close now as we are due to board shortly.

Speak to you again from ‘across the pond.’