We leave Boston today to travel to Vermont but before we do that let me tell you about last night’s ball game, Boston Red Sox versus Oakland.

We toyed with the idea of getting a taxi to Fenway Park as it seemed a lot easier than walking to the station and working out how to buy tickets. Our last experience of train travel was when we wanted to travel from New Jersey into New York City to go and see Ground Zero. Now we are quite intelligent folk and as some of you will agree, I’m quite a techie (Sandra that is, not Si, no tittering from anyone thank you!) but it really was a bit of a nightmare. We had to purchase them from a machine that really didn’t speak English, I think it had been imported from the planet Krypton! Anyway, we had to enlist the help of a very pleasant guard who explained it all to us. It wasn’t possible to buy return tickets, had to be singles. Alas, I ended up using the inbound ticket to travel outbound, the guard on the train didn’t notice and I was lucky that the inbound train guard didn’t either! Duh!

Anyway, I digress …………. last night’s ticket purchases was extremely easy, even though it was from a machine and only cost us $11.00 for two returns to travel anywhere. Now that’s what I call cheap. So we jump on board, packed like sardines in a can (we’ll never complain about the London Underground again!) and off we shoot to Fenway Park.

It was a great game and the Boston Red Sox won by 11-1. The whole thing about baseball is that it’s such a family event. Everyone having a great time. There’s no swearing and shouting of abuse like we have at football (soccer for our US followers) matches. At football, once the game starts everyone is concentrated purely on the game. No-one speaks or usually moves until half-time whereas at baseball there’s people on the move all the time but not in a distracting way. There are dozens and dozens of snack vendors going up and down the isles selling hot dogs, pizza, peanuts, candy floss and drinks. No need to go hungry or thirsty there. 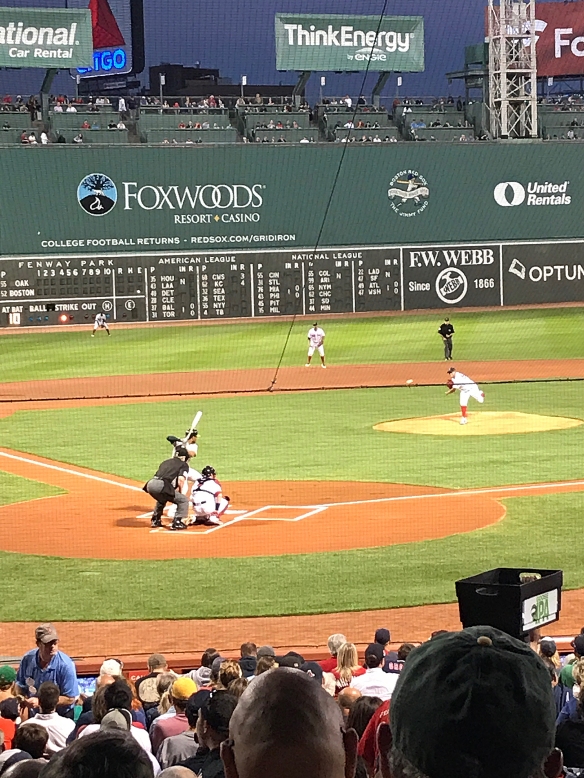 First Ball! Can you spot it? Not bad considering I took it on my iPhone!

They were having a special event last night in aid of children’s cancer and they had families affected who came on to the pitch.

We had great seats just up from behind the batter. We were under cover and there was also a fine net so that no-one would get hit with the ball if it came behind. Sadly, there was a very small area where the net was not attached to the roof and we couldn’t believe it when a ball came through that small space and hit an elderly gentleman on the head! 😱 🤕 He had a little cut but seemed okay, the medics however insisted he went out with them to be checked over. He was very reluctant to go though and miss the game.

All in all a great experience. 👍

As we needed to go to the Post Office this morning and it was just along from the Paramount Cafe we decided we would go in there again for breakfast. As we entered the waiter welcomed us back which was a nice touch. Another great breakfast consumed, Si had the Avocado Surprise while I just had scrambled eggs on toast.

Just one side note regarding Boston ….. we were told this morning that there were gangs of young men on Boston Common last night with guns and one was critically injured!! 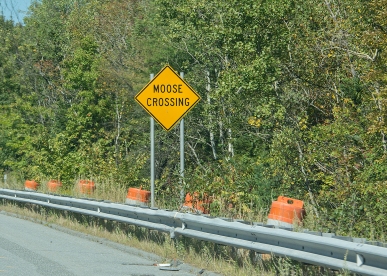 It was a lovely three-hour drive to where we are staying, in Taftsville, just outside Woodstock, at the Apple Butter Inn. An 1850’s farmhouse bed and breakfast and our hosts are Jill and Don together with Ginger a Cavalier King Charles Spaniel.

The B&B is absolutely lovely. We are in the King David room and it even has a sleeping porch all screened in so that we can sit there in comfort with a nice glass of wine and some cheese. In fact, Si’s already been down the road to the little local store and purchased said items! 😀

As we had arrived rather too early for check-in we decided to go into Woodstock to take a look around. It must be at least 20 years since we were last there. It’s a wonderful little town with those gorgeous little shops that are always full of things we can’t possibly live without!! 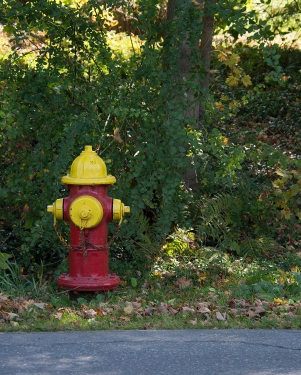 There are a couple of lovely covered bridges locally that have been restored to their former glory.

On the drive into the B&B we crossed over the Ottauquechee River with its covered bridge and waterfall. Next to it stands a building that for centuries served as a woollen mill and is now home to Simon Pearce Glass and The Mill restaurant. We are booked there for dinner this evening. We are told no-one who eats there is ever disappointed! I shall report back later this evening on our experience. In the meantime, this is the setting!

Well, we’ve returned from The Mill at Simon Pearce and what a find that turned out to be. It was voted one of “America’s Most Romantic Restaurants” and we could see why, everything was magnificent. We were advised to book early and turn up about ten minutes ahead of time as we wanted a table by the window and it’s first, come first served. We did as we were told and bingo, we had the best seat in the house.

We may go back tomorrow evening. We both started with mashed avocado and lump crab on toast then Si had the fillet mignon and on a lady’s recommendation who eats there regularly, I had horseradish crusted cod, it was magnifico!! We shared Bakewell Tart to finish and the waiter was keen to know what we thought of their English pudding. We reassured him that it could easily have been made ‘back home’ so that pleased him.

For those who follow Si’s daily intake, here’s tonights!

Well, it’s been a long old day one way and another so it’s off to bed we go. Tomorrow we continue our tour of Vermont!