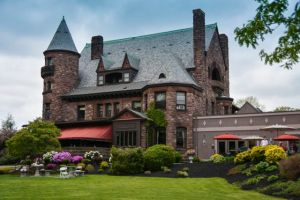 We started the day by driving to Belhurst Castle, originally called ‘Bellehurst’ meaning beautiful forest) in Geneva for Sunday brunch. The food was excellent as were the mimosas!! We will definitely be visiting here again when we return to this part of the world at the end of our journey in July.

The property that surrounds Belhurst Castle was originally the site of a Seneca Indian village and home to the Council of the Six nations of Iroquois. In May of 1824 the land came into the possession of a Mr. Joseph Fellows, a lawyer from our very own Warwickshire.

In 1830 a gentleman called Mr. Bucke lived at the castle and used the alias of Henry Hall.  After dying in 1836 it was discovered that William Henry Bucke had been treasurer of the Covent Garden Theatre and had embezzled theatre funds, married his stepmother, fled to the US and assumed the name Henry Hall in an effort to avoid capture!!

The Castle has changed hands many times over the years but since 1992 has been owned by a father and son and is now a luxury hotel, complete with a ghost called Isabella (an actress from Covent Garden who was also married to William Bucke).  It is listed on the National Register of Historic Properties and has been voted ‘One of the Most Romantic Places in New York State’ and at least two weddings a week are held at the Castle.

After our lovely brunch Dot took us to the Waterloo outlets!! A great time was had by all and as those who know me well will not be surprised to hear me say ‘yes, of course I bought shoes’, plus many other things.  Simon lost total control and actually bought some things too!!!! Oh dear, I feel the need to purchase another suitcase!!

We are now spending the night at Dot’s summer villa in Bath in a beautiful wooded setting with a lake …….. a lovely end to a perfect day. 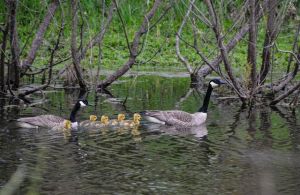