Where’s BT Infinity when we need it!! Still can’t post to the blog so am typing this for when normal service is resumed.  Hopefully on Sunday (and here we are!) 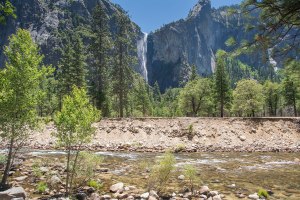 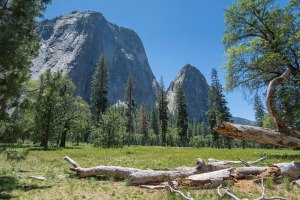 We spent Friday enjoying the wonder that is Yosemite National Park. There are many magnificent things to see and photograph and we captured a few of them.

Yosemite covers an area of 761,268 acres and is visited each year by over 3.7 million visitors. It is internationally recognised for its spectacular granite cliffs, waterfalls, clear streams and giant sequoia groves. Almost 95% of the park is designated wilderness. The park has an elevation range from 2,127 to 13,114 feet (648 to 3,997 m).

We felt as though we were at the 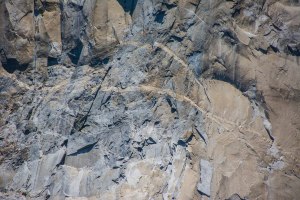 There are climbers on El Capitan!! Can you see them?

top of the world today when we reached the end of the road at Glacier Point.  It stands at an elevation of 7,214 feet (2,199 m) and there is a sheer drop of 3,200 feet (980 m) to Curry Village standing below. You need a good head for heights to peer over the barrier that’s for sure. 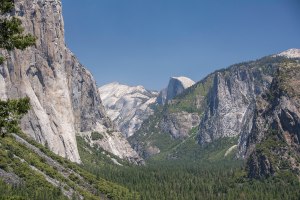 Us at Tunnel View 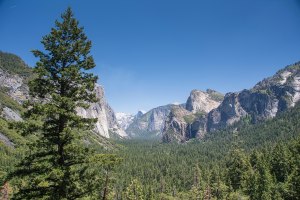 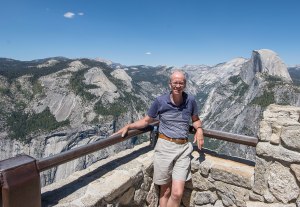 El Capitan is a vertical rock formation 3,000 feet from base to summit along it’s tallest face and is one of the world’s favourite challenges for rock climbers. Today we were treated to such a spectacle and saw climbers on the sheer walls. Some of those who undertake the climb will do it over two days, so get to the halfway point, string up a hammock and spend the night suspended on the side of the rock before finishing their climb next day.  We were told that some of the more really extreme climbers have scaled it in two hours!!!!!! It would take us two years!!

Tomorrow (Saturday) we return to hike some of the less challenging trails.

Tonight for dinner we found a little gem of a place called Charlotte’s Hotel in Groveland. Great food, super atmosphere and was very popular with the locals. Not your typical American food, instead they served small plates of different foods that people could share instead of everyone getting oversized portions that mostly end up being thrown away.