First of all, congratulations to Lisa and Malcolm! Ten points to you both. Lisa, because you knew the film I was referring to was The Bridges of Madison County starring Clint Eastwood and Meryl Streep (anyone who hasn’t seen it yet, watch it now. It’s heartbreaking!) and also to Malcolm because being a guy, he’s probably never heard of The Bridges of Madison County but he knew there was a film called Winterset and also that John Wayne was born there. Your points are in the the post! 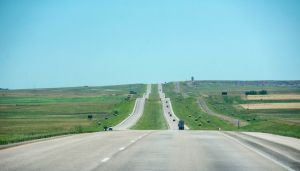 Five hours of this!

In the middle of nowhere

In the middle of nowhere

Five hours of this 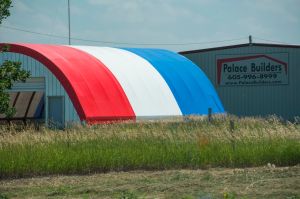 Those French get everywhere! 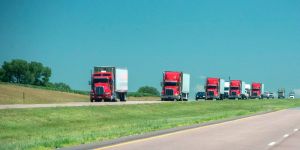 Today was another driving day, this time to Sioux Falls. It was a five hour drive and the scenery was basically the same all the way and the five hours were spent on one road, the I90, more or less a dead straight one.

Luckily, as always, I spent all the trip with the ‘resident photographer’s’ camera on my lap taking photos as we sped along. Here are a few for you to enjoy.

I keep meaning to say that at the moment the whole of the U.S. is undertaking a major highway refurbishment and I think we’ve been through them all.  My understanding is that the roads in the U.S. were so bad with potholes (a little like us in the U.K. then!) that it was decided to upgrade the Interstate system thereby improving the roads and possibly helping the economy at the same time.

An interesting fact for you, is that under President Eisenhower, one mile in every five of all Interstates had to be perfectly straight to be used in case of emergency aircraft landing!! I bet not many of you knew that!

Another thing I wanted to share with you all was …. roundabouts or circles to those in the U.S. It’s true to say that there are not many roundabouts in the country and on the Montana map we had there was an explanation of how to use them. Well, I’ve been keeping a hold of the map to take a photo of it to share with you all, but now I’ve been and thrown it away! Those in the U.K. would have loved it. I’ll have to keep an eye out for another one.

One more thing I’ve been meaning to say during our visits to the National Parks is, if any of you ever come here and intend on ‘doing’ the National Parks then make sure that at the first Park you visit you buy an Annual Pass, currently for $80 (£55). Some of the Parks can be very expensive and we have saved a butt load of money by getting the Pass. For instance, Yosemite and Yellowstone each charge $25 (£18) per park for a seven-day ticket.

After our overnight stay here in Sioux Falls we move on tomorrow for another film stop in Winterset. See you there!