We started the day by taking the opportunity to do a horse ride in the back country of the Park. Three million people visit the Park every year but less than 1% actually get to see ‘behind the scenes’ and we can now say we are two of the 1%.

Simon rode Logan and I had Crockett, two very lovely animals. They were very gentle and we were lucky enough to see bison and elk on our ride plus quite a few elk bones! You will see from the photos that we decided to wear safety helmets. After listening to the safety talk where we were told that ‘death’ was a real possibility due to the wild life and terrain so we thought the insurance company would take more kindly to paying any bills that may have occurred from the ride if we wore helmets. Here we are looking every ounce the riding professionals that we are!!!!! Don’t you just love those helmets!!

One suggestion for the wranglers would be to provide mounting blocks for the ‘vertically challenged’ among us!! It’s a shame someone didn’t get a video of me trying to mount Crockett, it would have made a very good YouTube video!!!!! 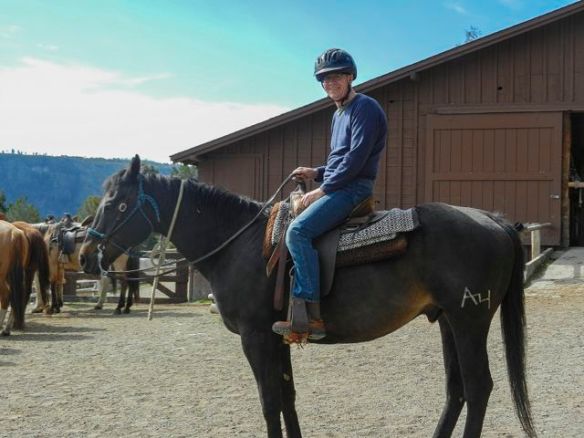 On the way to our next destination we passed one of the hot springs and lovely waterfall near Mammoth where we are staying.

One of the hot springs at Mammoth 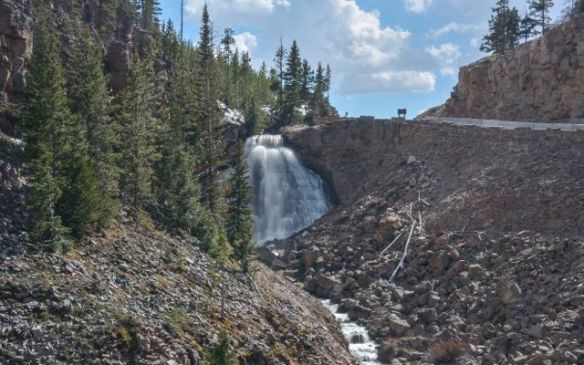 After our very enjoyable ride we made our way to Norris Geyser Basin where probably the biggest collection of geysers in the Park can be found. We spent a couple of hours doing the complete 2.2 miles circuit. This place is really something to see and smell!!!! The smell of rotten eggs makes me gag every time (I know, too much information). We were lucky enough to see one of the geysers, Vixen Geyser, erupting, showering three children with water. They were very excited indeed and were running around telling everyone what had happened, giggling all the time. 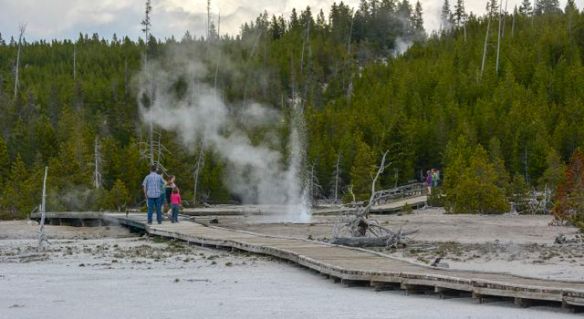 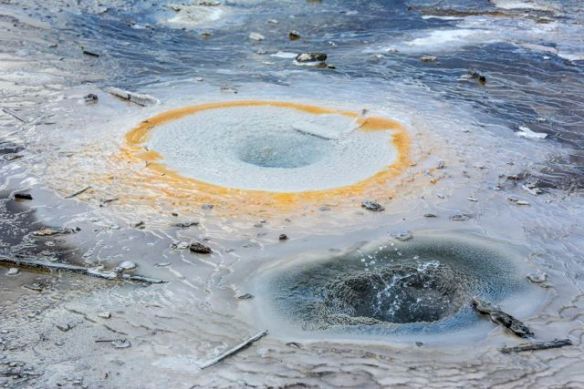 We then drove up to Canyon Village, which sits more or less in the centre of the Park, through the Dunraven Pass which only re-opened yesterday after the winter snows and en-route saw snow drifts of between 8-10 feet. Simon decided he would find out how deep the snow really was ………….. it was deep. We were rather taken by surprise when we looked up at the mountain and there was a skier coming down towards us complete with his back pack …. I think he must have been going to do his shopping and taking the quick route!

It was a beautiful drive but when we arrived at the Village it rained and got really quite cold but after refreshing ourselves at the Yellowstone Grill where we partook of a burger (nicely cooked) for Si and a grilled cheese sandwich for me, (I have to post what we ate because there are those among you who like to know the tiniest little detail) we really didn’t care!

In one of my earlier posts I told you about the hotel we are staying at, but didn’t mention that it has just one dining room which means there is usually a wait for a table. All the staff are very friendly and always willing to have a chat about your day.

Today, we had just arrived for dinner when a rather large coach party arrived and it seems that there was immediately a shortage of bread plates for the incoming diners. We were just enjoying our pre-dinner bread (always a favourite with me, I would rather have the bread than the meal!) when a waiter came and asked us if we had finished with our plates, we said we hadn’t which was pretty obvious as there was still bread on them. He went away and five minutes later was back again asking if he could take them away. We again told him ‘no’ and from then on every time we saw approaching we took hold of the plates with both hands just in case he was coming to steal them from us. Needless to say, I had hysterics and just couldn’t stop laughing.

The food has been excellent, but tonight it was necessary to complain about Simon’s bison steak (I do hope it wasn’t one of those we saw earlier in the day), sorry to all vegetarians reading this!! He ordered it as ‘medium’ but when it arrived was swimming in blood, even the mashed potato couldn’t soak it up! Now anyone who has watched MasterChef will know that red meat has to be left to rest before serving it or the end result is a plate swimming in blood.

Nevertheless, he ate it and then complained, well he did say that regardless it was actually rather delicious. I did advise the manager, Lauren, of what MasterChef had taught me and she was obviously very impressed with my knowledge as she kindly took the cost of the steak off the bill and even treated us to two free desserts!! The poor waiter who served us had only been working there a week and the next morning he had the pleasure of serving us again for breakfast and this time we had to complain about the fact that we had to wait 25 minutes before we were even served coffee and tea, let alone our breakfast. I think he was rather pleased to see the back of us!