So, today we decided to ‘do’ Pikes Peak. We set off in what we thought was the right direction, heading north out of Colorado Springs and quickly realised we were going in the wrong direction! I have to say that it wasn’t Margaret’s fault this time because we hadn’t plugged her in. It was human error.

But, all was not lost because when we realised our mistake we were going to turn around when we noticed we were at a place called Briargate and Si suddenly realised that we wanted to go there anyway because we wanted to visit the Apple store that was located there. We needed to buy another portable drive because the one we’d brought with us to back-up the laptop has thrown a wobbly and won’t work! Amazon, expect an email from me when we return!

We headed back south and soon found Pikes Peak Highway. Pikes Peak is known as America’s Mountain. The Highway is 19 miles long, is a two-lane road ascending more than 6,000 feet in elevation to 14,115 and we were going to drive it. The Ranger said the 19 miles would take us one hour to drive. 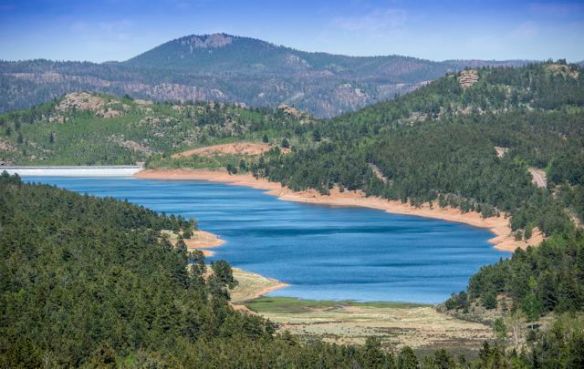 Some people travel to the summit by cog railway. It was first built in 1891 and runs continually today.

Well, goodness me, it was one hairy drive. I thought the Trail Ridge Road was scary, this was much, much worse. There were sheer drops round hairpin bends, it was like being on a switchback! I dread to think what my blood pressure reading must have been. Si was okay because he was on the ‘safe’ side. At times I just couldn’t look over the edge and was holding on to the car door handle for dear life. Some of the drop offs are 1,000 feet down! We were told to turn off the air-conditioning going up and when driving back down to use low gear.

The views of course were stunning. We were way above the tree line and as we turned each corner and looked up you could see the cars above just getting higher and higher.

Pikes Peak Highway with Pikes Peak in the distance

Half way up the road we stopped to change into jeans as we were told it would be really cold at the summit but when we got there it wasn’t too bad even though there was some snow and we didn’t need thick jackets.

Can you imagine racing up this road to the summit. Well, daring drivers have been doing just that since the first race in 1916. The race continues today. Mining magnet Spencer Penrose arranged the race to advertise his new mountain auto highway. The first winner, Rea Lentz, sped to the summit in just 20 minutes and 55.6 seconds. Can you imagine driving at speed on a dirt road. It was only fully paved in 2011! The hill climb is the second oldest race in the US behind only the Indianapolis 500.

At the summit is a memorial dedicated o Katherine Lee Bates (August 12th 1859 to March 28th 1929). She was an American songwriter and was the author of the words to the anthem ‘America the Beautiful’.

The first draft of “America the Beautiful” was hastily jotted down in a notebook during the summer of 1893, which Bates spent teaching English at Colorado College in Colorado Springs. Later she remembered:

One day some of the other teachers and I decided to go on a trip to 14,000-foot Pikes Peak. We hired a prairie wagon. Near the top we had to leave the wagon and go the rest of the way on mules. I was very tired. But when I saw the view, I felt great joy. All the wonder of America seemed displayed there, with the sea-like expanse. 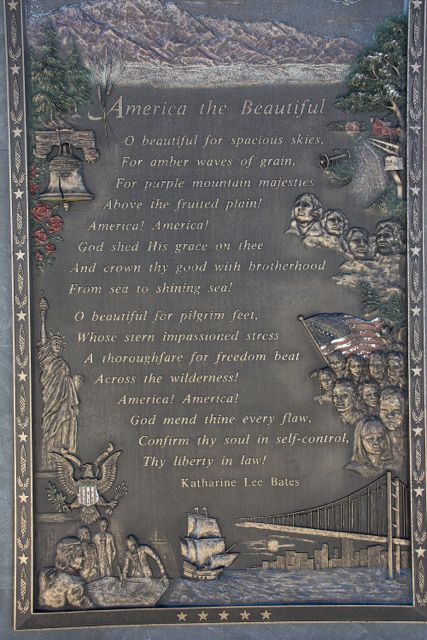 About half-way up stands the Historic Glen-Cove Inn built in the late teens early 1920s. It has always been somewhere for travellers to stop and refresh themselves.

Photos from the summit. 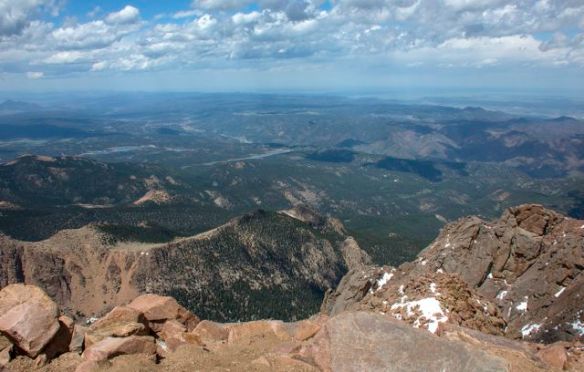 Si at the Summit

Sand at the Summit

On the way back down there is a compulsory brake check by a ranger. This is because if the breaks overheat they will stop working and no-one wants to be without breaks at this height. Our’s measured 8% so we were given a ‘well done’ because Si was driving down correctly. Well done Si!

Almost back to Earth!

It suddenly occurred to me that I’ve taken a couple of photos of Si at dinner but have forgotten to post them. So this is me righting a wrong! I decided to have a nice healthy salad …………. this one would last me a week!

Sand with her healthy salad!

Si with his short ribs! 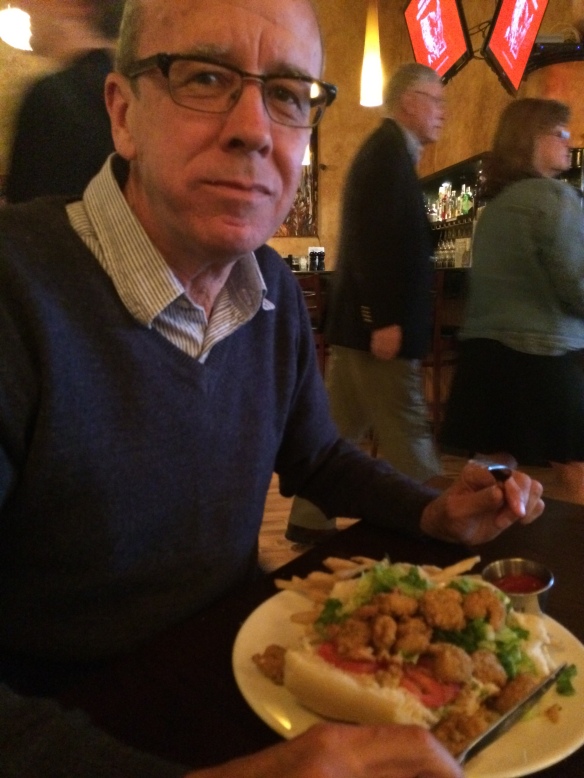