Well, we left Moab under cloudy skies and it had been raining! Raining in Moab in the summer, unusual! We only had to travel 50 miles and blue skies were back again and the temperature started to rise. By the time we reached Vegas it was 108ºF, so a little warm!!

We had a very disturbed night’s sleep because for some reason we kept getting rattles around our room. One was coming from the fridge, so in the end we had to get up, pull it out and unplug it. We never found where the other one was coming from so it continued to drive us crazy all night.

If that wasn’t bad enough, this morning we lost Margaret!! Got into the car ready to set our route for Las Vegas and wait ………. where’s Margaret? She wasn’t with us. Now I’m usually a very organised person and I always check the hotel room before we leave but somehow she had been left behind. I returned to our room and just couldn’t find her, panic ensued. I eventually found her hiding in a ‘safe place’ where I’d hidden her the night before when we went to dinner. Relief all round, especially on Margaret’s part. She knew she was heading home and there was no way she wanted to be left behind in Moab!

I must report on last night’s meal at Jeffrey’s Steakhouse. It was, once again fantastic. I had the French 75, gin and tonic and enjoyed a great steak with the largest jacket potato I’ve ever seen. Si had the ‘special’ which consisted of a ribeye steak with shrimp and soft-shell crab. It was my intention to photograph the meal but we got talking to a lovely couple on the next table and all thought of photography went right out of my mind! I think the French 75 had a lot to do with it!

The drive from Moab to Las Vegas was quite boring and very uninteresting but the photographer’s apprentice did manage to photograph a few things along the way. 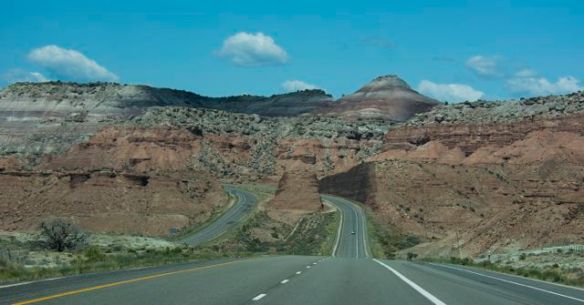 From Moab to Las Vegas

Water Tower on the road from Moab to Las Vegas

From Moab to Las Vegas

One interesting thing we saw at a place called Hurricane, about 131 miles from Vegas but couldn’t manage to photograph as it was on the opposite side of the road, was the largest Walmart (Asda) distribution centre we have ever seen. There must have been 500 trailers ready to be loaded up with goodies!

Well, we’ve had a lovely dinner, fish and chicken for a change and managed to actually win a little in the casino. Let’s hope we don’t have any rattles in our room tonight and can get a good night’s sleep!