We had an exciting start to the day! We were just getting dressed when the fire alarm here in the hotel went off. What do we do on these occasions? Well, like most people we stand and wait to see if it will stop and then question if there really is a fire and should we leave the building! Well, as it continued and no one told us otherwise, we collected up what we considered to be the important things, bag with money, cards, passports, air tickets etc, my phone and of course my Apple Watch! There was no way I was going to leave that behind!

The fire brigade turned up en-masse but it seemed to be a false alarm, we were only outside for about 10 minutes and then they let us back in and we headed for breakfast.

Here begins today’s history lesson!! I do love a little bit of history!

So, after all the excitement we headed to Lexington. Lexington is a town located in Middlesex County, Massachusetts. Settled in 1641, this town is prominent for being the site of the first shot of the American Revolutionary War, in the Battle of Lexington and Concord at dawn on 19th April 1775, colloquially known as the “Shot heard around the world” when news spread about the revolution.

Having received word that the regular army (the British troops) had left Boston in force to seize and destroy military supplies in Concord, several dozen militiamen gathered on the town common, and then eventually went to Buckman Tavern to await the arrival of the troops. Definite word reached them just before sunrise, and Captain Parker’s company of militia left the tavern to assemble in two ranks on the common. Following the arrival of the army, a single shot was fired, by whom, is still not known. With this shot, the American Revolutionary War began. 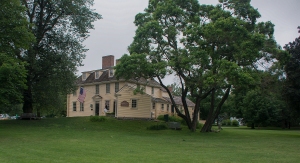 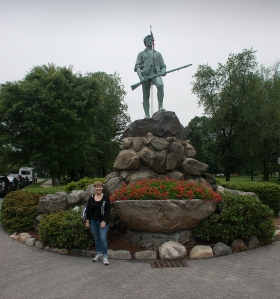 Sand at the Minuteman memorial at Battle Green

The Hancock-Clarke House played a prominent role in the Battle of Lexington and Concord as both Hancock and Samuel Adams, leaders of the colonials, were staying in the house before the battle.

It was to this house that Paul Revere, an American silversmith, engraver, early industrialist and a patriot in the American Revolution rode from Boston to alert the Colonial militia to the approach of British forces before the battle began.

Then it was on to Concord. After the battle at Lexington the British troops marched on to Concord to confront five companies of Minutemen and five of non-Minuteman militia who occupied a hill near North Bridge, they totalled about 400 against the British light infantry companies from the 4th, 10th, and 43rd Regiments of Foot under Captain Walter Laurie, a force totaling about 90-95 men. The British retreated across the river and the two sides faced each other across the North Bridge. 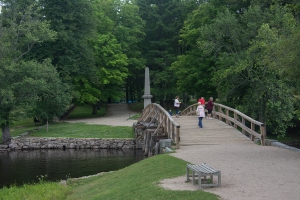 A brief exchange of fire ensued which saw the first instance of Americans firing to deadly effect on British regulars, after which the British retreated. Ralph Waldo Emerson, positing that world history pivoted at that moment (an assertion that is disputed, as earlier events at Lexington Battle Green could be termed the true opening of the battle), called the first shot of this skirmish the “shot heard around the world” in his 1837 poem “Concord Hymn”.

And so it was that things would never be the same again. The American Revolutionary War or American War of Independence was fought in the United States between the Kingdom of Great Britain and thirteen of its former North American colonies, which had declared themselves the independent United States of American. Although the war lasted from 1775 until 1783, independence was formally declared in July 1776.

Last night we went to The Colonial Inn for dinner. We last went there 23 years ago! It was just the same. The food was lovely and my mimosa was just heavenly! The film ‘House Sitter’ with Steve Martin and Goldie Horn was filmed in and around Concord and one scene was actually filmed at the Inn. Most of you won’t have heard of the film, it was filmed in 1992!! We actually arrived in Concord back in 1992 the day after they had filmed at the Inn. What a shame, if we had arrived a day earlier we may have been famous!!

Sand at The Colonial Inn

Si with his lobster at The Colonial Inn

Tomorrow we move on to Bar Harbour, Maine and Arcadia National Park. We will be staying at a lovely historic B&B. The breakfasts look divine!!