First of all let me just say that some of you may have noticed the blog is missing its sidebar! Why, goodness only knows. I’ll work on that when I get home. I think the humidity has affected it somehow!!

Well, goodness, gracious, I’ve just published this post and the sidebar’s back!! Who knows how long it will stay!?

So, today was our final full day here in Savannah. As the day was forecast to be hot and humid again we decided to spend the day visiting the  Savannah History Museum and then the Georgia State Railroad Museum Historic Site rounding off with a walk back to our hotel to make sure Si had as many photos as possible and then finishing off for dinner again at The Olde Pink House.

We walked to the Museums and along the way we came across this brass statue of Johnny Mercer. In 1961, he wrote the lyrics to “Moon River” for Audrey Hepburn in Breakfast at Tiffany’s.

The Savannah History Museum allows you to walk through the city’s history from 1733, spanning the American Revolution and Civil War, all the way to today! It was very interesting with one item in particular being of great interest, that was ………………. the bus bench from Forrest Gump.

The Georgia State Railroad was constructed in 1853 by the Central of Georgia Railway before the outbreak of the American Civil War and was declared a National Historic Landmark in 1976.

The complex is considered the most complete antebellum railroad complex in the United States. The historic railroad structures at the site include a partial roundhouse with operating turntable, partial machine shop, Tender Frame Shop, Blacksmith Shop, Boiler House, Storehouse and Print Shop, Lumber and Planning Sheds, Coach and Paint Shops, and a partial Carpentry Shop. 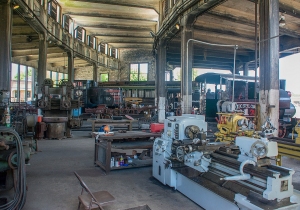 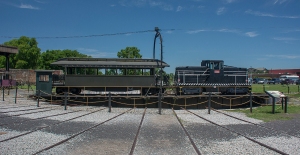 Turntable at the museum. We rode on the train! 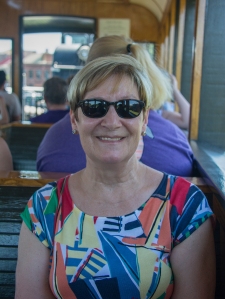 Sand on the train at the museum

Si on the train too – looking thoughtful!

After that we stopped for lunch at The Six Pence Pub again and this time I tried their Cottage Pie. It was very good, just needed a little more gravy. Si had crab cakes. 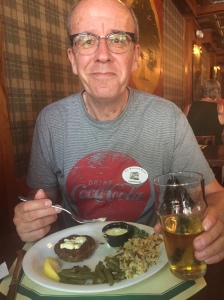 On the way back and as it was rather hot, we jumped on the tour bus again to take us to Forsyth Park so that Si could photograph the famous fountain. The fountain was added to the park in 1858 and is reminiscent of fountains in the Place de la Concorde in Paris and in Cuzco, Peru.

We arrived at our stop to get off and who was getting on the bus but Forrest himself!! Well, obviously not the real one but a guy just like him. He was so funny.

Forrest Gump on our tour bus! 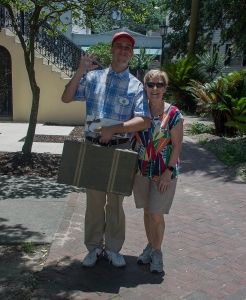 For those who have seen the film, right at the start it shows a feather falling from a steeple. This is the steeple it is supposed to have fallen from.

One of the carriages showing people around Savannah

Around Savannah we’ve seen a lot of these fish downpipes on many mansions, they are supposed to be considered good luck!

So, we had dinner at The Old Pink House again! They sat us in the ballroom but it was packed and so noisy we couldn’t hear each other so they moved us to a much smaller, quieter room. The meal was lovely. Si had fillet mignon and I had pecan-crusted chicken breast followed by blueberry pie and ice-cream. 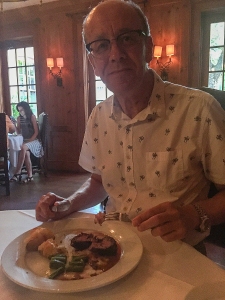 Si with his fillet mignon 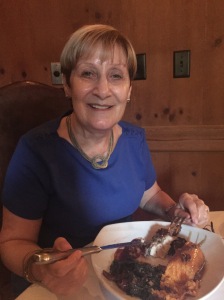 Sand with her pecan-crusted chicken

Si with his blueberry pie

And Sand with her’s!

Tomorrow we drive back to Atlanta and then fly home to Heathrow so there will be no post tomorrow. The next time you’ll hear from us will be ‘across the pond.’ See you on Friday!