I’m pleased to report that the photographer’s assistant was up and out this morning, not feeling 100% but not too bad! The temperature at 9.30 a.m. was 59 degrees but this afternoon it rose to 72 degrees. Some rain and lightening was forecast from about 4.00 p.m. but I’m pleased to say that it stayed dry until about 5.30 p.m. when we had quite a shower but the lightening didn’t materialise and the sun came out and it’s very pleasant indeed! Fingers crossed the weather’s okay for tomorrow as we are off on a tour.

We were originally booked to go on a Wildlife Eco Tour here in the Grand Teton National Park today from 6 a.m. until 2 p.m. but we were asked if we would change our day to tomorrow the 13th June which we did. Good job we did because I don’t think an early start like that would have been to the photographer’s assistant’s liking at all!! 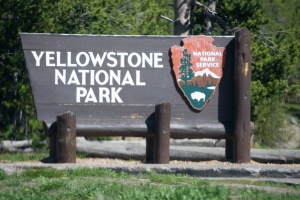 Instead we drove to Yellowstone National Park, an hours drive from the cabin to the entrance of Yellowstone and then another hour to one of our destinations which today was Grand Prismatic Spring, the other being the gift shop at The Lodge to purchase a very important item, well a quantity actually of ……………….. Yellowstone bear soaps!! I bought some when I visited before and they proved to be very popular!

Yellowstone Bear Soap – cute or what!

We were surprised when we arrived in Yellowstone at the amount of ground snow there still is. Much more than in the Tetons.

Grand Prismatic Spring is the largest hot spring in the United States, and the third largest in the world, after Frying Pan Lake in New Zealand and Boiling Lake in Dominica. It was was noted by geologists working in the Hayden Geological Survey of 1871, and named by them for its striking coloration. Its colours match the rainbow dispersion of white light by an optical prism: red, orange, yellow, green, and blue.

We’ve been to Yellowstone twice before and each time have photographed the spring at ground level but we knew it was possible to climb up above the Spring and look down to take photographs. Problem was that there was no official route. People would scramble up the hillside and over time a social path was made. An overlook was proposed back in 1997 but only opened in 2017. It is now a 1.5 mile hike up to the viewing platform and is very popular with visitors. It’s well worth the climb, the view is certainly something to behold.

We saw this smaller pool on our way up to Prismatic Spring but don’t know the name of it ….. research needed!

A smaller pool on the way to Grand Prismatic Spring

On the way up to the viewing platform we saw this bison have a rest and no doubt warming himself. They lie near to thermals because of the warmth. 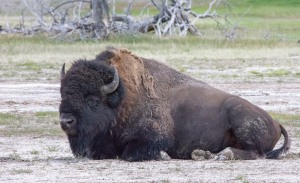 On the way back to the car a bison that had been sleeping nearby decided to get up and have a swim. He’s looking rather the worse for wear poor thing!

Bison in the swim!

Bison after his swim

As we’ve been before and visited most of the favourite places to see we decided we would just concentrate on the ones we hadn’t. So, we stopped at Kepler Cascades, a waterfall on the Firehole River. The cascades drop approximately 150 feet over multiple drops. The longest drop is 50 feet. They were actually named in 1881 for the 12 year old son of Wyoming’s territorial governor, Kepler Hoyt, who toured the park with his father, Governor John Hoyt. 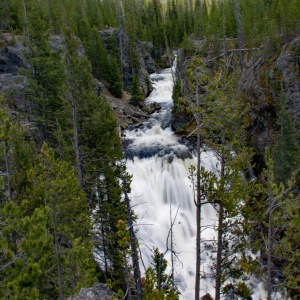 We passed through the Continental Divide a few times today. Continental divides spans the USA north to south and it divides the watershed of two great oceans. In the east rivers drain to the Atlantic and to the west they drain to the Pacific.

S&S at the Continental Divide – Elevation 8391!

Grand Teton National Park is named for Grand Teton, the tallest mountain in the Teton Range. The naming of the mountains is attributed to early 19th-century French-speaking trappers—les trois tétons (the three teats) was later anglicised and shortened to Tetons. At 13,775 feet (4,199 m), Grand Teton abruptly rises more than 7,000 feet (2,100 m) above Jackson Hole, almost 850 feet (260 m) higher than Mount Owen, the second-highest summit in the range. The park has numerous lakes, including 15-mile-long (24 km) Jackson Lake as well as streams of varying length and the upper main stem of the Snake River. Though in a state of recession, a dozen small glaciers persist at the higher elevations near the highest peaks in the range. Some of the rocks in the park are the oldest found in any American national park and have been dated at nearly 2.7 billion years. 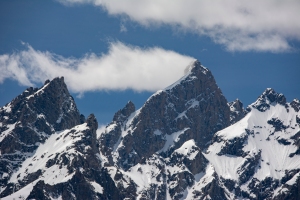 We’ve noticed over the past couple of days that clouds have been hanging over the very peak of Grand Teton, it looks as though it’s smoking!

We’ve made a discovery …………….. there are Prairie Dogs living here under some of the cabins! It’s not as bad as it sounds ………… this is them! They are herbivorous burrowing rodents native to the grasslands of North America. They are a type of ground squirrel, found in the United States, Canadian Prairies and Mexico. 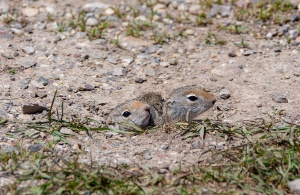 As we left Yellowstone we clocked up 1000 miles in our trusty steed!

One thing that’s been bought to my attention (thanks Nat) is that the photographs in the blog are not behaving as they should i.e. you should be able to click on them and they open up larger in a new window and they are not doing that. Well, I think I’ve solved the problem and as of this post you should be able to do just that. Well fingers crossed they do! I’ll work my way back through all the photos of this trip and see if I can rectify them too.

Well, we need an early night as we have the early start tomorrow to I will say “goodnight” to all. Thanks for reading and we hope to have some great wildlife photos of our tour tomorrow.