So today we decided to ‘get back on the road’ and do some hiking. We started off at Jenny Lake to view Hidden Falls and Inspiration Point. Covering roughly 1191 acres, glacially-carved Jenny Lake is the second largest lake in the Grand Tetons. At 423 feet it’s also one of the deepest. The lake was named for a Shoshone Indian named Jenny who assisted with camp logistics during the Hayden Geological Survey of 1872. Nearby Leigh Lake is named for her husband, Richard “Beaver Dick” Leigh, an itinerant trapper and early tour guide who helped guide the Hayden Expedition through the area. In 1876 Jenny and their six children died of smallpox. Jenny Lake and Leigh Lake are either side of String Lake so they do in fact remain joined together forever. How romantic! 😢

We started to see the water from Hidden Falls as soon as we started on the trail. The noise and the speed of the water was truly amazing. It’s basically snow melt from up in the mountains. The captain of our ferry was telling us that further up the mountain there is still waist-high snow! We thought that we had better give that hike a miss today.

Sand on hike to Hidden Falls 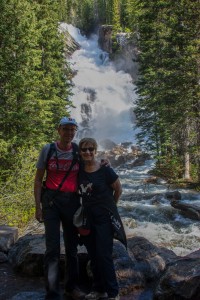 San and Si at Hidden Falls 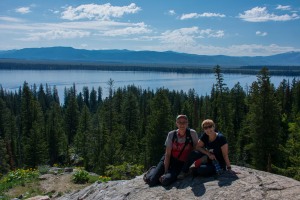 Sand and Si at Inspiration Point

We also did a short hikes along Leigh Lake and then String Lake. Both very beautiful areas.

On the way back down we saw this American Robin and loads of Balsam Root. Balsam Root is a big favourite with bears so always best to be alert when there’s a lot of that around! 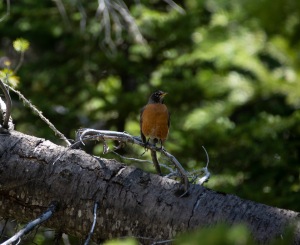 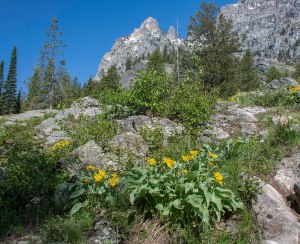 As we left we saw a ranger with moose and elk horns and two bear pelts! We went over to see what it was all about and he told us what happened to the two bears, one black and one grizzly. The poor grizzly was knocked down and killed by a car driving too fast. We’ve noticed here that there is often no patience by car drivers. The speed limits go from 25 to 55 but mostly people want to travel at 55 with no thought of the animals that can suddenly cross the road.

The poor black bear, a mother of two cubs, became attached to humans after they starting feeding her and the cubs and eventually she had to be euthanised and the cubs went off to sanctuaries. When they first arrived they refused bear ‘food’ instead preferring to eat apples from people’s hands and then lick them. How sad it is we can’t train humans to be more thoughtful of wildlife.

Si was amazed when he lifted up the moose horns as they were so heavy. Each spring, usually in April, antler bone begins to grow inside a nourishing skin covering on the moose’s head, called velvet due to its short, soft hairs. Antlers are one of the fastest-growing tissues of an animal, and can grow up to eight inches of antler growth in a span of nine days and can weigh as much as 60 pounds! Around September, the velvet will shed and the antler bone hardens. As males age, their antlers grow in bigger each year. 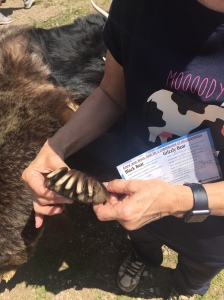 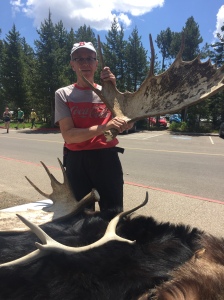 While we were up at Lower Inspiration Point a family were having a snack when a Chipmunk suddenly appeared, quite frantic, and was trying to get at the food. He had obviously been fed by humans in the past too.

To finish off the day we drove the very bendy road to Signal Mountain. It is an isolated summit standing 7,720 feet above sea level. The next closest higher summit is more than 10 miles away, and this isolation provides sweeping views of the Teton Range, much of the northern Jackson Hole area as well as the Snake River. Though located adjacent to the Tetons, Signal Mountain was not formed in the same manner or period. The mountain originally was formed by volcanic ashfall from one of the eruptions of the Yellowstone hotspot. The peak is also partially a glacial moraine formed by a receding glacier that came south out of the Yellowstone icecap. This same glacier also created neighbouring Jackson Lake.

There were a couple of things I forgot to mention yesterday ……. the first thing is that we’ve noticed on this trip particularly is young boys on walkie-talkies! It seems families have decided that that is a great way of keeping track of their youngsters rather than by mobile phones!

The second was …………….. mosquitoes! When we went to Oxbow Bend at sunset last night, they were swarming. It was a truly horrible experience for the photographer ……………… he insisted that his assistant stay in the car, so that’s just what she did!!😂 Here’s another photo of our evening visit yesterday to Schwabacher Landing. 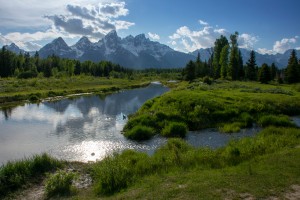 Schwabacher Landing in the evening

Also, on our Eco Tour I told you about the herd of bison who crossed the road right in front of us. Well, I’ve managed to load a small video of the event. Sadly, I wasn’t able to load the full video as it was too long so you only a small portion of the whole herd. Still, better than none at all I guess!

It’s been a while since we’ve had a history lesson so here’s one now on the American Bison courtesy of The Nature Conservancy‘s ‘Bison History and Facts’.

Great herds of bison once roamed North America between the Appalachian Mountains on the east and the Rockies on the west. It is estimated that around 30 million bison roamed the continent when Columbus landed. The herds were so large that the bison became a symbol of the seemingly endless resources of the continent.

In the late 1800s, the bison were almost entirely eliminated, with less than 1,000 individuals left at the lowest point. A 1905 a census indicated there were 835 wild bison and 256 bison in captivity at that time. Sanctuaries, zoos, and parks were safe havens for bison and helped to increase their numbers. The first national preserve for bison was founded in 1907 near Cache, OK and later became the Wichita Mountains National Wildlife Reserve. Subsequent game laws and other protective measures allowed the surviving bison to live and multiply.

Today their numbers have rebounded to about 350,000 – only about 1% of their original numbers, but enough so that the bison are no longer in danger of extinction. About 15,000 reside on public lands in the US, the rest are private herds, such as those maintained by The Nature Conservancy.

Historically, the bison’s most important predators were wolves. Wolves constantly followed the large herds, culling the old, incapacitated, and very young animals. Even solitary adult bulls were not immune to attack. To a lesser extent, native human Americans were predators of the bison. Grizzlies occasionally killed bison, and mountain lions and coyotes were also occasional opportunistic predators of young calves.

But one of the primary killers, before the slaughter by humans in the late 1800s, were iced-over rivers. Thousands of bison drowned, particularly in the northern U.S., when the enormous weight of crossing herds caused the ice to give way.

Here ends the lesson for today!

For dinner tonight we decided to ‘stay local’ and ate here at Dornans at the Chuckwagon Grill. Good ol’ American food!  A slightly different setting to what we’ve been used to but look at that view! The food was good too. It only stays open until 9 p.m. and each evening a country singer entertains the diners. Si had his usual ribs and as I wasn’t particularly hungry I just had the mac ‘n cheese.

View from the Grill

At the Chuckwagon Grill with the entertainer in the background 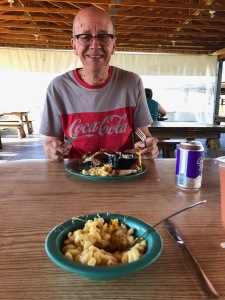 Tomorrow is our last full day here in Jackson 😢so it’s our intention to hike to Taggart Lake. We’ve been there before but it is so beautiful it deserves another visit!

Once again thanks for reading and your comments. More tomorrow!