Today,we spent a wonderful day visiting Monticello, the home of America’s third President, Thomas Jefferson (1743-1826). Building commenced in 1796 and 70% is still  original, it has 60% of its original contents and unbelievably, 30% of the window/door glass is original too! Jefferson drafted the Declaration of Independence that resulted in the declaration that “All men are created equal – and have a right to life, liberty and the pursuit of happiness”.  This resulted in the War of Independence with us Brits in 1775 to 1783 …… and of course, we lost!!! 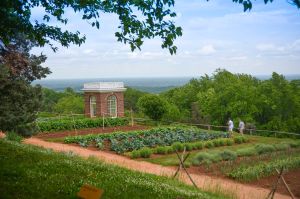 Jefferson studied science and was an enthusiast of the arts.  In 1819 he also founded and designed the University of Virginia. Although he felt that slavery was an abomination, that didn’t stop him keeping over 600 slaves himself.  He did however, treat them better than most and kept families together instead of selling them.  Unfortunately, he died deeply in debt and all his assets, including his slaves, had to be sold.

The term ‘sold down the river’ was first used in relation to slavery and meant that a slave was sold to another owner who lived ‘down the river’. 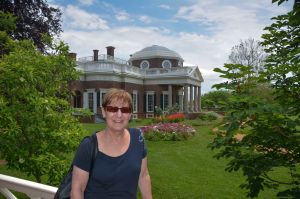 Monticello is the only United States Presidents’ home that is a UNESCO World Heritage Site.

On the way back from Monticello we experienced a storm the likes of which we have never seen before. It was of Biblical proportions and we believe was the butt end of the recent tornado in Oklahoma.

Tomorrow it’s ‘goodbye’ Virginia and ‘hello’ Tennessee as we move to Nashville, the home of Country music. It will be the first of our really long drives and should take us about eight hours.

PS: It occurred to me later that I should have mentioned that Charlottesville and the surrounding area is home to The Waltons!  Does anyone besides me remember that series? I think that must have been my first real obsession, I used to watch every episode.  I’ve even got the whole nine series on DVD.