Today we’ve done the Graceland tour and I have to say that although we are not big Elvis fans we both found it quite emotional.

Graceland is a lovely place, not particularly large compared to some stars’ homes today. Elvis bought it in 1957 when he was just 22. He lived there with his Mum, Dad and Grandma.  Having been born into a poor family, their home had only two rooms at the time, he was a twin but sadly his twin brother was stillborn, he was conscious of hardship and was a very generous person.  If his brother, Jesse, had lived I wonder if they may have

been a double act!! He was always ready to help other people, and would give generously to people in need of help.  Cheques were on show for 1968 and each time he had given $1000 to each good cause, which at the time was a lot of money.

He was very close to his Mum, Gladys, and was always aware of how hard times had been for both her and his Dad and he was always buying her things to make up for the hard times. 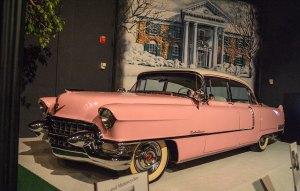 He bought her a pink Cadillac and he kept the car after she died because he knew she loved it.  He would buy her jewellery, and things he thought she would like.  His Dad spent a period of time in jail and it was during that time when it was just Elivs and his Mum that they became very close. When Gladys died at the age of 46 he was devastated.

We were surprised at how many stage outfits he had.  All variations on a theme of jump suits.  Some encrusted with all kinds of stones.  We saw his car collection and were also able to go on board his private jet, Lisa Marie.  There were many different coloured seats and each had a matching seat belt all 24 carat gold plated.  He also had a 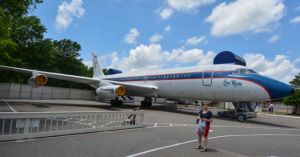 He was originally buried in a cemetery next to his Mum but for security reasons his Dad decided that both Elvis and Gladys should be moved to Graceland.  Elvis already had a meditation garden that he loved to sit in at quiet times, so their bodies were moved there and his Dad and Grandma, together with a memorial to his brother, Jesse, are there now too.

Tonight we took our lives in our hands and hit Beale Street!! The street to be in Memphis.  We ate at BB King’s Blues Bar and listened to Blind Mississippi Morris playing and singing the blues. He was excellent. 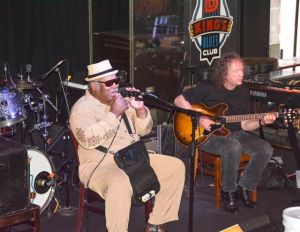 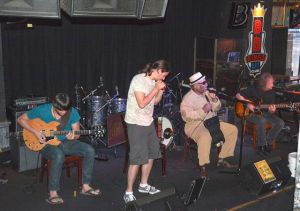 We were lucky that when we arrived in Beale Street there was a display of ‘hot rod’ cars … Si was in his element. 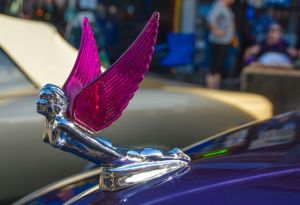 So tomorrow we leave Memphis and head to Hot Springs, Arkansas but before we go I just wanted to share with you a picture of  ‘a new place we’ve found to dwell, it’s down at the end of Lonely Street at the … Heartbreak Hotel’. Now if that doesn’t get you singing then nothing will!! 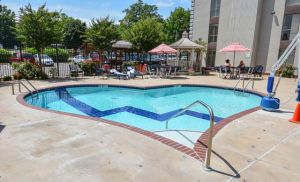 Leave a Reply to Pam and Trev Cancel reply