Before I write about today’s adventures, I must congratulate our resident photographer on his latest achievement …………… he has won the Caxton FX June Photographic Competition and will receive the grand prize of £100 for his photograph of Sunrise at Mesa Arch in Canyonlands National Park in Utah. For those who have not seen the photo before, here it is:

Mesa Arch with the reflection of the rising sun

On the way back to the B&B we discovered that the Bar Harbour Band were playing in the park so we stopped to listen and enjoyed them playing “When the Saints go marching in” which is very apt for us as we are Southampton F.C. supporters!

Si at McKays with his fish and chips!

We spent a very pleasant couple of hours this morning having breakfast and chatting with some of the other guests here at the B&B. It’s amazing what we all find to talk about!

Our first port of call today was a visit to The Wild Gardens of Acadia at the Sieur de Monts Spring in Acadia National Park together with the Abbe Museum. The Wild Gardens reflect the typical habitats as found on Mount Desert Island. More than 300 native species are labeled to make identification easy in nine separate display areas.

A butterfly at the Wild Gardens

Bugs at the Wild Gardens!

Symbolically speaking, Sieur de Monts Spring is perhaps the most significant and meaningful place on Mount Desert Island. It is ground that honors the vision, passion, and dedication of a private citizen who devoted his adult life to the fulfillment of the dream that became known as Acadia National Park. George B. Dorr (1855 – 1944), even though from a life of privilege himself, worked incessantly to preserve and protect the land and waters of Acadia for all future generations to enjoy. 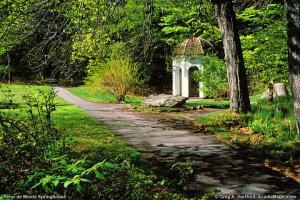 We then travelled on to see the Bass Harbour Head lighthouse (apparently, it’s well know to photographers) and taking a photo required a fair amount of agility! The best way to get a good shot is out to sea in a boat) but as we didn’t have a boat with us this morning it meant climbing over rocks, along with many others, all trying to get the best shot possible.

After the lighthouse it was time for lunch so we headed for Thurstons Lobster Pound, it’s a well known eatery for the locals and was recommended to us by our host, Jerry, here at the B&B. Well, the intention was to eat lobster but sadly, when we walked in and saw the poor live lobsters being weighed before cooking. we just could not condemn those poor creatures so instead we had lobster and cheese toasted sandwiches!! At least we didn’t have to see the poor thing staring at us before eating!

Talking of food, which I always seem to be, dinner tonight was at a restaurant called Fathoms. Si thought he’d died and gone to Heaven when the waitress said one of their specials of the day was pork belly! Well, you know how he feels about that, said it was delicious and followed it with scallops. One of these days he will turn into pork belly and scallops!!

So, tomorrow is the 4th of July! There will be big celebrations all around. Si and I will probably be hiding somewhere inside the B&B ………….. just in case the natives don’t take too kindly to us Brits being present at their celebrations!!!!!