We decided an easy day was the order of the day as tomorrow we have a six-hour drive to Elmira in upstate New York.

Tomorrow is a very special day as we will be meeting up with our best pals, Dot, Nat and JB. Those of you who know me well or have been following the blog for a while will know that Dot and Nat are my ‘Twilight’ best buddies. It’s been two years since we were all together so as you can imagine, we are all very excited!

So, we drove back to Lake Winnipesaukee but this time went to the west side of the Lake to a town called Wolfeboro. It’s not very large, the population at the 2010 census was just 6,269, but as it’s a holiday destination it was very busy. Parking’s a problem but we were very lucky and managed to find a space just off the main street.

The town was granted by Colonial Governor Benning Wentworth in 1759 to four young men of Portsmouth, New Hampshire and named Wolfeborough in honour of English General James Wolfe, who had been victorious at the Battle of the Plains of Abraham in 1759. In 1763, 2,300 acres were added to the 60 acres reserved for the governor. Colonial Governor John Wentworth, his nephew, established an estate on the site, known as Kingswood. Built in 1771 beside what is now called Lake Wentworth this was the first summer country estate in northern New England. Settled in 1768, the town was incorporated in 1770. 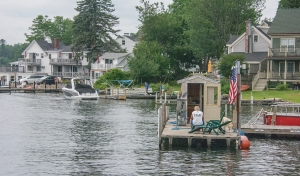 Over the years Wolfeboro, whose town motto is “The Oldest Summer Resort in America” became popular as a summer colony, particularly for families from Boston and southern New Hampshire. Prince Rainier and Princess Grace of Monaco, Kurt Vonnegut, Drew Barrymore and Jimmy Fallon have spent time in Wolfeboro and in August 2007, French President Nicolas Sarkozy holidayed there too.

It has loads of little shops and eating establishments. Of course, we shopped and then we ate, at Jo Green’s Garden Cafe. We sat on the upper deck and the view out over the Lake was just wonderful.

We then travelled back to New London for our dinner reservation, The New London Inn Coach House Restaurant, again! Again, I had the wonderful steak and Si had …………… scallops! Again, I forgot to take pictures but believe me, it happened!

There was one thing I forgot to mention on yesterday’s post and that was that we saw a man being arrested on the main street, handcuffed and put in the back of a police car! Well, that’s not something we see very often, if at all, where we are from! Apparently, he was being arrested for DUI, driving under the influence of alcohol. We were told that it happens quite a lot here in New London. My goodness, you wouldn’t think it was that kind of place, it’s very small and very quiet. Hey ho, you never know!!

To cap it all, when we arrived at the restaurant tonight there were two police cars parked outside! We thought they must have been waiting to breathalyse Si as he left after dinner but when we asked the receptionist what was ‘going down’ she said that one of the policemen was her boyfriend and he’d locked his keys in his cruiser and had to phone for backup to bring out a spare set of keys!!!!!!!!