The day started sunny and hot again today but the humidity was not as bad as yesterday when it was an absolute shocker!!

In the Inn today there’s been two birthday celebrations, one 70 year old gentleman and another who was 90 and there’s been a wedding. Being such a lovely hotel it’s very popular for celebrations.

Desiree came and met us for brunch this morning. Denise was unable to join us as she was going to be taking a charity spinning class. We would have joined in but alas we didn’t have our cycling shoes!! That was our excuse anyway!

Brunch was delicious. Si had shrimp and grits(!!!) whilst Desiree and I had the goats cheese and fresh herb omelettes. We were all set for the day!

After collecting Denise we headed out for Duke College in Durham. Duke University is a private research university. Founded by Methodists and Quakers in the present-day town of Trinity in 1838, the school moved to Durham in 1892. In 1924, tobacco and electric power industrialist James Buchanan Dukeestablished The Duke Endowment, at which time the institution changed its name to honor his deceased father, Washington Duke.

Duke students often refer to the campus as “the Gothic Wonderland,” a nickname referring to the Collegiate Gothic architecture of West Campus. The stone used for West Campus has seven primary colors and seventeen shades of colour. James B. Duke initially suggested the use of stone from a quarry in Princeton, New Jersey, but later amended the plans to purchase a local quarry in Hillsborough to reduce costs.

The buildings are magnificent. Unfortunately, the Chapel was closed today for a wedding so we were unable to take a look inside but Denise tells us it’s just wonderful. Note the blue North Carolina sky in these photographs. 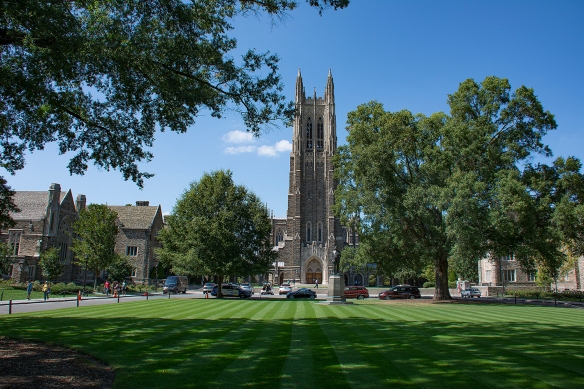 During our tour of the campus we came across Sara and her Service Dog, Leo. What a great pair they were.

Our next port of call was to Historic Stagville. Those who know me well know that there’s nothing I like more than to spend a view hours soaking up some history and that’s just what we did this afternoon.

Stagville Plantation with buildings constructed from the late 18th century to the mid-19th century, was part of one of the largest plantation complexes in the American South. The entire complex was owned by the Bennehan and Cameron families; it comprised roughly 30,000 acres and was home to almost 900 enslaved African-Americans in 1860.

The remains of Historic Stagville consist of 71 acres, in three tracts, and provide a unique look at North Carolina’s history and general infrastructure in the antebellum South. Among structures on the Stagville site are several historic houses and barns, including the original Bennehan House and some of the original slave quarters, which were in an area known as Horton Grove.

The Bennehan House was built in 1787 with a large addition in 1799, and Horton Grove, an area of two-story slave residences were built in 1850. The slave residences are well preserved and are the only two-story slave quarters remaining in North Carolina. Significant archaeological finds around the quarters have given archaeologists and historians a glimpse into the lives of the many enslaved people who lived and worked at Stagville and throughout the Bennehan-Cameron holdings.

We took a very interesting tour of the Bennehan house below, Horton Grove and the Great Barn.

One of the slave houses in Horton Grove

The bricks forming the chimney to the right of the house were all hand-made in 1850 and  one of them bore the thumb print of the maker and one the fingerprints of a small child.

An old stool in the Great Barn

The Great Barn was built in 1860 and stands today as a testament to the enslaved who built it.

The Bennehan-Cameron family sold their final holdings in the property in the 1950s and in 1976, Liggett and Meyers Tobacco Company, which had owned and worked the land for decades, donated some of the acreage to the state of North Carolina, which now operates the property as Historic Stagville State Historic Site, a historic house museum which belongs to the North Carolina Department of Natural and Cultural Resources.

At the start of the tour we noticed something very strange on the way to the house! Had someone been playing tennis? No, these are actually Osage oranges. Osage orange is a small deciduous tree or large shrub, typically growing to 8 to 15 metres (30–50 ft) tall. The distinctive fruit, is roughly spherical, bumpy,  8 to 15 centimetres (3–6 in) in diameter, and turns a bright yellow-green in the autumn. The fruits secrete a sticky white latex when cut or damaged. Despite the name “Osage orange”, it is only very distantly related to the orange and is instead a member of the mulberry family.

The earliest account of the tree in the English language was given by William Dunbar, a Scottish explorer, in his narrative of a journey made in 1804 from St. Catherine’s Landing on the Mississippi River to the Ouachita River. 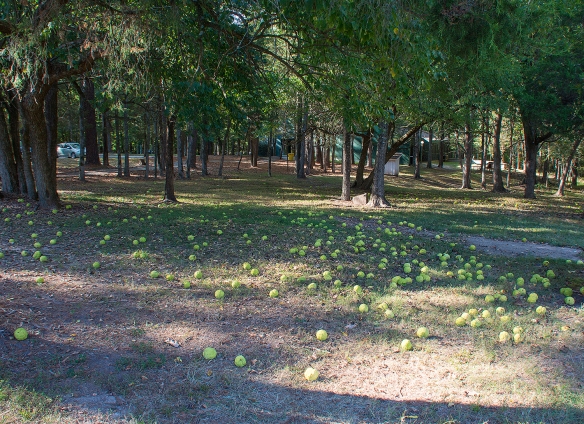 After all the walking and learning we were just about ready for dinner and Denise and Desiree thought we should be introduced to real North Carolina BBQ and so we headed off to a restaurant called Picnic.

On the way we stopped off to photograph the Catsburg Country Store in Durham, a great favourite of Denise.

This two-story, hip-roofed, frame structure is a well-preserved box-and-canopy store. Built in the 1920s by Sheriff Eugene G. Belvin.

Though no longer open for business, it is still widely recognized as a local landmark. Its renown comes from the large painted image of a black cat on the front parapet above the word Catsburg, which has led to the building becoming a favorite of local photographers and artists. This part of town is called Catsburg as a tribute to the late Sheriff Belvin, whose nickname was “Cat.” Belvin was an extremely popular sheriff in Durham County who earned his nickname through his ability to sneak up on bootleggers and moonshiners in the 1920s. Little to nothing is known of “Cat” but some say that his knack for finding local stills had much to do with him being a Distiller and wiping out the competition.

Well, Picnic turned out to be a great choice for dinner, the food was excellent. They even had Plymouth Gin which some of you will know is my absolute favourite beverage so Picnic scores 10 out 10 as far as I’m concerned. The waitress was very attentive and had a great booming laugh which tickled us all.

All in all, a great day with dear friends.

Our adventure continues with the ladies tomorrow morning and then we are off to Gettysburg before heading to Newark, New Jersey for our flight home on Monday night.